Vejsil's son Amir helping construct a roof on a barn for livestock, material donated by Connecticut Friends of Bosnia and BILD
The Kapić family together with BILD's director Christopher Bragdon
Samira tending to chickens with the chicks and chicken food donated by BILD
Vejsil with family and friends during a pause from building the new barn
Vejsil and Samira's children with cousins and friends from the village

Helping a landmine survivor and his family

Vejsil Kapić survived the war. When it was safe, Vejsil, his wife Samira, and their two children Amir and Selma, returned to their village. They built a small shed to live in while they rebuilt their house. Vejsil earned money by gathering firewood in the forest with his brother. One day, the tree they cut landed on an anti-tank mine instantly killing his brother and throwing Vejsil about 50 feet through the air.


When they found Vejsil on the ground, they initially thought he was dead. When they brought him to the hospital, the doctors did not think they could save him actually pulling the sheet over his head. But one of the doctors saw Vejsil’s wife Samira and children, Amir and Selma in the hallway and felt compelled to try to save Vejsil. His face was maimed beyond recognition.


They saved Vejsil. The love of his family saved his spirit. An organization of private donors called Connecticut Friends of Bosnia rebuilt their house and paid for reconstructive surgery for Vejsil that was partially successful.


In 2005, BILD contributed towards a barn to help his family become self-sustaining. Each year since, BILD staff, volunteers and friends visit Vejsil and his family. Private donations help their family establish sustainable sources of income, help with the children’s education and provide assistance as needed.


Since 2005, when we helped build the barn, we have delivered clothing, chicks and chicken food, helped buy a cow and a horse, provided a computer for the children’s education.


In the fall of 2014, we delivered chicks and chicken food. We also had the pleasure of going to Vejsil’s daughter’s wedding.


Since 2014, we make seasonal deliveries of chicks and chicken food as the Kapić family has become essentially self-reliant while Vejsil’s health has stabilized.


Each year, we raise about $500 to help the Kapić family with their farming and livestock. If you would like to donate, visit this webpage. 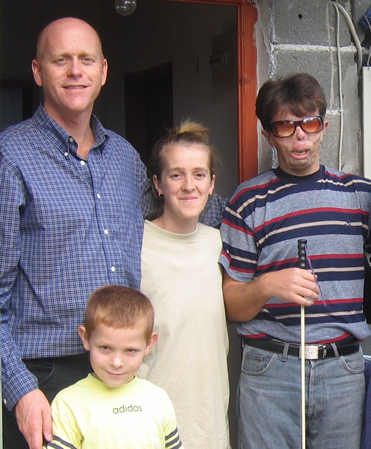 Christopher Bragdon with Samira and Vejsil Kapić and their son Amir 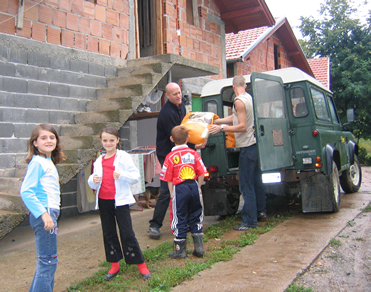 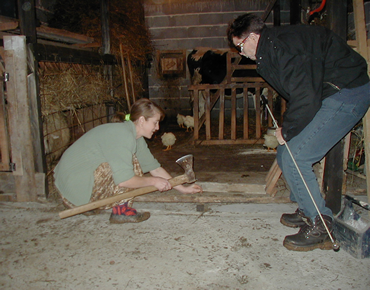 Samira with the children during a break from collecting hay